I have a fairly large collection of old family photographs.  I’m lucky that many of them have names and/or dates written on the back so I know or can work out who they are of.  Choosing a favourite is difficult.  Do I choose the one of my Mum and Dad taken in the 1960s that, for as long as I can remember, sat on the table in their bedroom?  Or do I choose the one of my grandmother and her brother, who until last year I knew nothing about beyond his name?  Or do I choose a photo of one my great-grandmothers as they are the oldest?  After much thought though I chose the one of my grandfather and his family, from around the mid-1890s. 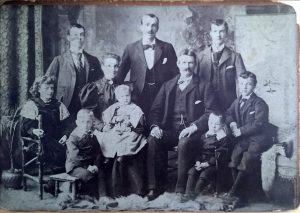 It’s a typical Victorian family photograph of “maw, paw and the weans” taken when my grandfather was still a baby.  It shows my great grandparents George and Helen McQuattie, with eight of their children.  George and Helen were both originally from Blairgowrie in Perthshire, marrying there on 17 July 1874.  Their first child, a son called John after his paternal grandfather, was born in Glasgow on 1 September 1874.  According to the 1911 census George and Helen then went on to have a further twelve children, of whom eight were still alive in 1911.  Of the children in this photograph the one that did not survive to be included in that census was their daughter, Elizabeth – seated on the left of the picture.  She died at the age of 17 in 1904 of Phthisis (better known as tuberculosis or “consumption”).  Sadly for Helen, none of her daughters survived into adulthood – four died in infancy and both Elizabeth and Annie – the child born after this photo was taken – died when they were 17.  But all her sons survived.  At least two of them, her youngest sons, Charles and Archibald (my grandfather), served in and survived the First World War.

George McQuattie worked all his life as a slater.  He died in 1916 at the age of 66.   None of his sons followed him into his profession, choosing instead jobs like engine fitter or machinist, tramway car worker or clerk.

Digging out this photograph has given me the chance to review and update the information I had about this family.  As is often the case, it’s been a while since I researched them and going back has meant that I’ve found out more.