The success of the recent BBC2 programme “A House Through Time” has sparked an interest in people to find out who owned and/or lived in their house in the past.   For me, as a genealogist, the interest is not in the builder or the architecture, but the people who lived there.

I’ve just finished researching a building in Glasgow, which consists (and always has) of shops on the ground floor and 4 flats above.  For most of it’s first 100 years – it was built in the early 1870s – the shops and flats were rented out to a succession of people; sometimes the tenants of the businesses lived “above the shop”.

There are a number of places you can look for information about who lived at a particular address – Council Valuation Rolls, Electoral registers, Post Office and/or Trade Directories.  None will give a complete picture of everyone who lived or worked there – for example, none of these will list the children of a family until they are old enough to vote when they will appear in Electoral Registers.  The only record of families are census records, but these were only taken every 10 years and actually record who was at a particular premises on a specific night.  Reconstructing a complete family requires researching many more records.  Wherever you look, it is always worth remembering too, that numbers – and sometimes street names – can change over time.

The first person recorded as living in one of the flats lived there with his spinster daughter.  Without detailed research (and time doesn’t always allow for that!) it’s not possible to be sure but it seems likely that the mother died young leaving her husband to care for their only daughter.  Before they were living in this property John Paterson was an Inspector of the Poor in Ayrshire, but in later census and other records he is recorded as a “portioner”.  Not a term we see much of nowadays.  A portioner in Scotland is someone who inherits a piece, or portion, of a larger piece of land or property, which can happen when a land or property is divided amongst a number of co-heirs.  This man lived in his flat for nearly 20 years, seeing other families come and go – and sharing his space with a lodger for a while (no doubt this helped with the rent).

One family that “lived above the shop” for a short time were the Dowalls.  William Dowall, the son of the family, was recorded as an accountant, a factor and, in 1881, as the sub-post master in one of the shops beneath the flats.  The family don’t appear to have stayed for a long time, which may have been because William died of Typhoid Fever in the flat later that same year.

At the end of the 19th and the start of the 20th century another family lived in one of the flats for a number of years.  The Rev James Craig, the head of the house, is recorded as being a “retired … minister” at the age of 56.  James Craig moved to a church in Blyth, Northumberland from Glasgow, in 1861.  There he met  his wife, and it was there that their six children were born.  However, in 1885, the minister found himself embroiled in a scandal; a court case that was widely reported in the newspapers of the time.  He was accused of being the father of a child born to a girl who had been the family’s servant, having forced himself upon her when there was no-one else in the house.  The court found him guilty and ordered that he pay maintenance of 5s a week – not that he actually ended up paying this out as the child died within an hour of the court making its decision!  The Rev Craig appealed the order, but this was turned down.  Naturally, the local Presbytery took a dim view of all this and the minister was suspended from his charge.  It took several meetings and negotiations before Rev Craig finally resigned and the family left the area.  The local newspaper, in June 188, reported that his congregation had presented him with “a valuable silver inkstand, suitably engraved, and a silver pencil case, as a token of respect and esteem”; his wife was given “a beautiful quilt, worked by the ladies [of the congregation] themselves”. 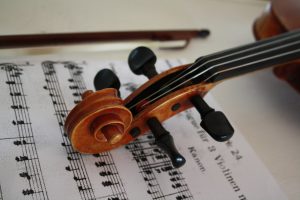 Later in the 20th century, one of the residents is recorded as violin teacher and musician.  He has a very Italian sounding name and caused me much confusion as he seems to just appear out of the blue in the house – there are no birth, marriage or death records of someone of his name.  Until a bit more research pointed to him being someone else altogether – with a very ordinary and common name.  Apparently, his father had used the same trick.  He believed that the Italian name sounded better, more convincing, to potential pupils!

There were, of course, many other people who lived in the flats over the years; some of the stories associated with them are happy, some are sad, and some make you smile, but all of them left their mark in some way.

Genealogists research more than just family trees.  I am a professional genealogist and family historian, contact me for help to find your family tree tales and the stories that make you who you are.