At this time of year we remember those who were killed or wounded in war and conflicts.  I’m lucky, both my grandfathers served in the First World War and survived.

I know little about what my paternal grandfather did.  All I have are his medals, which tell me that he was an Acting Warrant Officer, Class II with the Argyll and Sutherland Highlanders.  He died four years before I was born so I never met him, and my grandmother never spoke about him.

My maternal grandfather on the other hand lived to the ripe old age of 86.  Although I don’t have his medals (my mother sold them many years ago) I know he was a Gunner with the Royal Field Artillery (RFA).  His service record no longer exists either, but he did leave photographs and a very short description of his service in a letter that I found amongst my mother’s papers after she died. 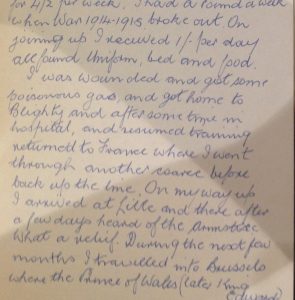 The letter appears to have been written later in my grandfather’s life and is addressed to the editor of a newspaper.  He tells the story of his life and then bemoans the current state of affairs in the country.  I’ve no idea if the letter was ever actually sent, but I’m pretty sure it was never published.   In this letter he says he “was wounded and got some poisonous gas and got home to Blighty”.   I knew he had been wounded as I have, somewhere, a photograph of him dressed in the “hospital blues” uniform, but there is nothing to give any clue where the hospital was, what his injury was or when he was there.

It was only last year that I was given some more information about his service; information that Grandpa must have given to his niece’s husband many years ago when he was researching the family history.

I now know he was in the 5th Brigade of the RFA; that he served in a mobile unit of six, later reduced to four, guns, which were horse drawn (which explains why there is a photograph of him on a horse).  He was at Cambrai in November 1917, so probably witnessed tanks being used.  He describes a “typical action” as “bombardment of German billets in area of St Quentin by two 18 pounders”.  I now also know that he was wounded in the arm by German shrapnel in March 1918 at somewhere called something like Hamme in Belgium and sent to a military hospital in Shrewsbury.   Based on this information I had a look at the unit war diary, though I didn’t expect it to tell me anything specific about my grandfather.  Just reading a few days worth – from January 1918 – was enough.  6 days of marching through heavy rain and high winds at the start, followed by a day of “general fatigues, cleaning etc”, then training for 4 days, on the second of which the “men bathed & clean change of underclothing given to them”.  After all that marching and training – and goodness knows what before that – I’m sure a bath and clean underclothes were very welcome!

I’ve no idea when this was taken but Grandpa is the soldier 2nd from the right.

He returned to France in November 1918, having been retrained as a “gun layer” (the person who aimed the gun) arriving in Lille just before the Armistice – “What a relief”, he says in his letter.  Next he went to Brussels, where he says, the Prince of Wales (later King Edward) took the salute (there’s a photograph of this on the Imperial War Museum web site) in the Square, and then he went to Cologne.  He’s not very complimentary about the Germans he comes across, though admits that as the peace had not yet been agreed by then they weren’t “allowed to be friendly”.

Grandpa used to tell us stories about his life – shipping whisky to America during the prohibition and visiting the Martell family at their château in Cognac were two of his favourites – but never, ever talked about his wartime experiences. I’m not surprised.